This application sought a 3 phase approval for two existing quarries to be expanded by deepening the existing pits, extending the footprint and operating the land use as a single quarry. It was estimated that 1.9 million m³ (or 3,610,000 tonnes) could have been extracted from the consolidated quarry over a period of 30 years.

The previous approvals for the “Pick” & “AMA” quarries amounted to an approved extraction rate of 160,000 m³ per annum. The proposed annual extraction rate for the new land use was exactly the same as that which has been previously approved and operated from the land. 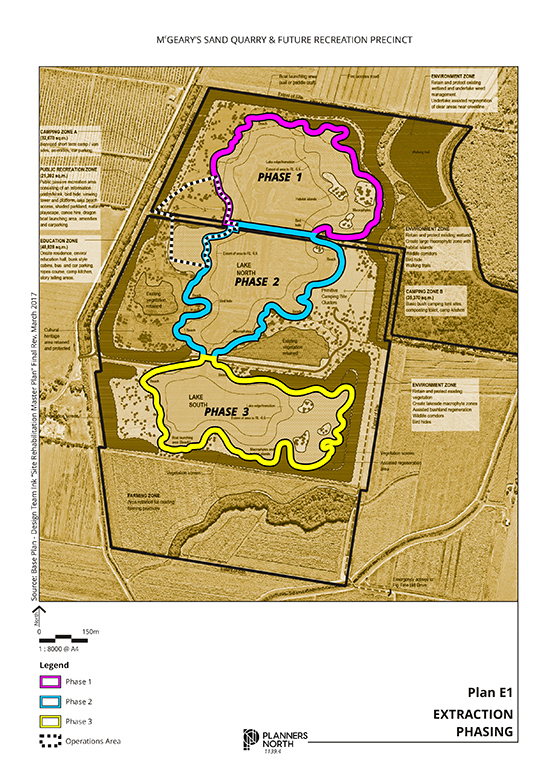 The approach we adopted for the Sand Quarry project was to contemplate the rehabilitated “end use” of the site whilst looking simultaneously at site constraints – noise, flooding, cultural significance, visual considerations and topography. In this way, the end use proposed sought to protect important site aspects. By “starting” the design of this quarry at what would ordinarily be the end, the resultant extractive program not only provided an important resource for the future of the Ballina Shire but also could have potentially provide an important resource, in perpetuity, for water-based recreation, camping, low scale tourism, public recreation, education and environmental protection.

This aspect was particularly important given that resident population growth and tourism growth is placing pressure on existing natural facilities like Lake Ainsworth and Shaws Bay.

In our opinion the development would have satisfied a legitimate need and continued development of the quarry land use was capable of implementation in a manner which mitigated potential adverse impacts, consistent with the zone objectives detailed in Council’s LEPs and accordingly approval of this project would have been in the public interest within the meaning of Section 79C(1) (e) of the Act. However, the proponent was threatened by aggressive opposition with protracted and expensive litigation. Our client was a local family company and in the face of expensive Court costs decided to withdraw this application.